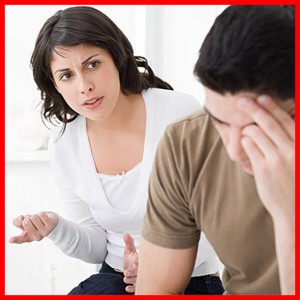 Most men would agree that nagging is the most effective killer of good relationships. No man likes to feel like a bad guy for things he never meant as a personal offense or attack, and no woman likes to hear from her paramour that she’s being a nag about something that she’s simply trying to get done. Partners on both sides often explode in altercations over such issues, try to make up, swear oaths to never be in the same situation again, and then fall back into old ways because they don’t know any better. Thus, the same nagging cycle continues on and on, until it has completely killed the passion and romance in the relationship and neither partner can stand to be around the other.

The first step to solving it is to accept and acknowledge when you’re nagging to begin with. After all, you can solve a problem when you can identify and accept you have one. If you use negative connotations when you talk, or try to get work done by reminding the other in a ‘look at everything I do vs. everything you do’ sort of way, or try to point out the other’s mistakes or shortcomings to get your way – you’re nagging.

Once you’ve recognized that you’re nagging your partner, here are a few behavioral suggestions that will help you snip the nagging in the bud, calmly communicate your own perspectives, and repair and improve your relationship in the process.

How To Stop Nagging Suggestion #1: Carefrontation

This term was coined by Dr. Stratyner – a relationship expert whose advice is often sought out by the Oprah Winfrey show. It is basically the anti-thesis of confrontation, and deals with reminding your man that you still see him in the same wonderful light as you did when you first met. The last thing that a man wants to feel is that his partner thinks of him as less than when they first met, rather than the opposite. Carefrontation automatically makes him less defensive since he doesn’t need to protect himself from feeling like a bumbling moron through your words. When you approach a situation on the offensive and expect a confrontation with your partner, chances are that’s exactly what you’re going to get.

How To Stop Nagging Suggestion #2: Communicate Without Mentioning His Shortcomings

The very basic characteristic of nagging is that it’s negative in nature. If you make him feel like a bad guy for every little thing as if he’s not doing something you asked simply to slight you, then you’re automatically putting him in a position where he feels the need to justify and defend himself – from his partner, the person who’s emotionally the closest to him. Why?

Instead, try making some jokes to lighten the mood on the subject. Or ask him nicely again, even if you’ve done so countless times before. After all, he isn’t trying to hurt you by not doing what you asked – he may simply have other pressing concerns or obligations that are dragging his mind away from the task you’ve asked him to do.

Explain in detail why you’d like him to do something, and what other pressing demands there are on your time that prevent you from being able to do the same. He may respond better since you’re not trying to paint him as the bad guy, but instead sharing your concerns and communicating with him.

How To Stop Nagging Suggestion #3: Remind Yourselves Of Your Roles

Both of you are partners, equal members of the same team. You need to remember this when you’re mentioning it to him. He isn’t forgetting to do something you asked him to in order to hurt, offend or slight you in anyway. Oftentimes, it’s just about how men and women are wired to deal with the same scenarios differently in their own way. (The toilet seat situation comes to mind).

In such times, if something he’s doing is getting to you, don’t start nagging, criticizing, or condescending in order to get him to do what you want. Instead, try to find solutions that work for both of you, in a sweet and loving way. You’re partners and equals. Don’t let small frustrations cause you to forget that simple foundational fact.

How To Stop Nagging Suggestion #4: Agree on a Suitable Timeline And Alternative Solution

Sometimes, no matter how many times you may have repeated a request, your man may have some professional commitments or other serious responsibilities weighing on his mind that cause him to forget what you may have asked him to do. In such a case, talk to him and suggest a possible time-line within which he could finish that for you [say, a few days]. Also, if the request can be completed by a hired handyman or professional, suggest hiring them at the end of the suggested time-line if the task isn’t complete.

This would show your man that you respect that he may have other commitments to look after, rather than being constantly available at your every beck and call, and he may open up to you about the problems that are getting in the way of finishing your request. Furthermore, he may ask you to hire the professional directly, or be grateful for your consideration and decide to finish the work on his own as soon as he can. Regardless, it won’t seem like nagging to him since you’re attempting to see things from his point of view and figure out solutions around his problems as well.

How To Stop Nagging Suggestion #5: Use A Little ‘Somethin Somethin’ As Incentive

Use some nookie and your ‘wily charms’ with your man to incentivize his doing a chore that he doesn’t enjoy participating in. Tell him that you think it’s sexy when he does that particular chore for you, but be prepared to follow through. Unless you follow through on your promise though, this tactic will fail and cause distrust between you two.

If he believes that he’ll get some extra ‘affection’ from you, or get to live his fantasy of seeing you dressed up like a naughty nurse – or whatever it is that he’s into – just for doing a simple little chore, then why not? It’s a fun, productive way to get your man to do something you’ve been requesting him repeatedly to do, without making him feel like you’re nagging in any way.

How To Stop Nagging Suggestion #6: Understand Him, And Help Him Understand You

Men, nor women for that matter, are mind-readers. And as much as women like to pretend otherwise, unless they explicitly tell us how they feel about a situation sometimes, it’s quite hard for us to ascertain their feelings and expectations.

Sometimes, just try sitting down and sharing your feelings about a particular chore which makes you feel anxious or stressed. Conversely, if you start a discussion with the view-point that he’s being lazy or a moron or trying to hurt you by not doing so – you’ll always seem like a nag, and chances are he’ll be right. Instead, if you approach him and ask him honestly and lovingly if there’s anything weighing him down and keeping him from completing the task, you’ll be showing him that you care about the demands on his time as well, rather than suspiciously accusing him and forcing him on the defensive.

The Bottom Line to Quit Nagging

The key to resolving the particularly vicious and love-numbing cycle of nagging is to simply be communicative and respectful. You are equal members of the same team, and the team can only be as effective and successful as its partnership. If you’re condescending, suspicious, or treat him like he’s your servant to be ordered about, it’ll obviously erode the foundation of your bond.

The best way to get over this is to remember that none of these situations are do-or-die, that lightening a situation with humor takes no effort and removes friction, and that you need to be appreciative and understanding of the demands on his time just as critically as he needs to be of yours.

If you can repair your communication, and use the same positive and fun reinforcements which the two of you used when you first started dating, it’ll not only stop the nagging for good, but make the same everyday chores that much more fun to accomplish together.